Myopia (also called nearsightedness) is the most common cause of impaired vision for people under age 40. In recent years, its prevalence is growing at an alarming rate. Globally, research suggests that in the year 2000, roughly 25 percent of the world's population was nearsighted but by the year 2050, it's expected that roughly half of the people on the planet will be myopic.

Symptoms:
Myopia is when one can see things perfectly when they are near, however objects in the distance are blurred. Some of the signs and symptoms of myopia include eyestrain, headaches, squinting to see properly and difficulty seeing objects far away, such as road signs or a blackboard at school.

It is a very common condition in which the light coming into the eye is not focused properly onto the retina, making it difficult to see objects far away. The condition is usually caused by an elongation of the eyeball that occurs over time. Myopia is typically treated with spectacles or contact lenses.

Progressive Myopia has become far too common among children in the last 20 years. In Progressive Myopia, the near-sightedness often begins in early childhood, and worsens through adolescence.  There is a genetic component too.

The causes are both genetic and environmental including: 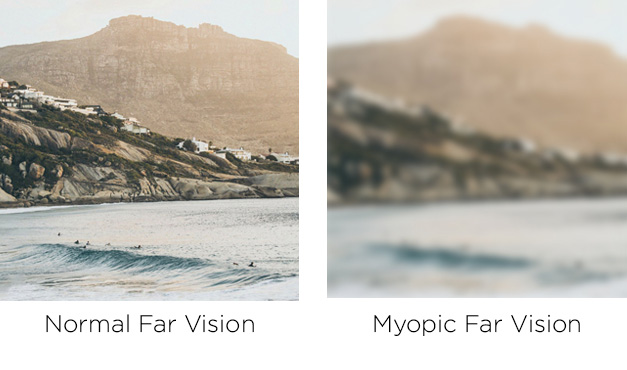 The good news is there are many things you can do to help minimize or even eliminate the risks of progressive myopia for your children.

Most people don’t think there is anything wrong with their eyes, so they don’t get them regularly tested but the truth is that you might have underlying problems and do need to get your eyes check at least every 2 years.  For children this is vitally important as nearly 80% of what a child learns is captured visually. If they are struggling to see, it is likely to affect their grades, their sports performance and even their behavior.