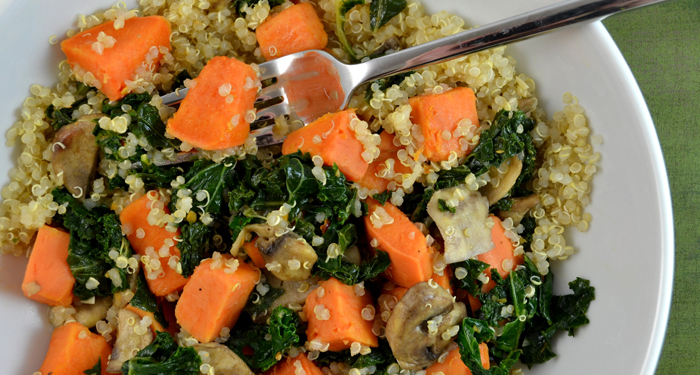 
How to make it
Place the quinoa and 2 cups water in a small saucepan and bring to a boil.
Reduce heat and simmer, covered, until water is absorbed, 12 to 15 minutes.
Meanwhile, heat the oil in a large pot over medium heat.
Add the sweet potatoes and mushrooms and cook, tossing occasionally, until golden and beginning to soften, 5 to 6 minutes.
Stir in the garlic and cook for 1 minute.
Add the kale, white wine vinegar, ¾ teaspoon salt, and ¼ teaspoon pepper.
Cook, tossing often, until the vegetables are tender, 10 to 12 minutes.
Serve the vegetables over the quinoa and sprinkle with the Parmesan.

HEALTHY INGREDIENTS: Lutein & Zeaxanthin
Recent research has discovered a third carotenoid in the macula. Called meso-zeaxanthin, this pigment is not found in food sources and appears to be created in the retina from ingested lutein. It is believed that lutein, zeaxanthin and meso-zeaxanthin in the macula block blue light from reaching the underlying structures in the retina, thereby reducing the risk of light-induced oxidative damage that could lead to macular degeneration (AMD). Kale, which is high in lutein is absorbed better when ingested with a small amount of fat such as olive oil. Although there is no recommended daily intake for lutein and zeaxanthin, most recent studies show a health benefit for lutein supplementation at 10 mg/day and zeaxanthin  supplementation at 2 mg/day.